Could a Global General Strike succeed?

The short answer is “yes”!

More people across the planet are interconnected by advances in telecommunications than ever before.  The think tanks of the liberal imperialist bourgeoisie have acknowledged this fact.(1)  Even they acknowledge that despite this greater global interconnection, basic social problems plaguing humanity still exist.  The climate is still warming, and the devastation to the existing biosphere is already manifesting.

It is on the basis of preserving the biosphere by reversing climate change that a recent Global General Strike, named the “Global Climate Strike”, was called for on September 20th to the 27th, 2019.  The danger to the global ecosystem from climate change due to carbon emissions is undeniable, and action to stop it is justified.  However, the longer answer to whether a Global General Strike can succeed starts here.

In the case of global climate change from carbon emissions, capitalism is the primary reason carbon emissions have not been curbed in the decades that climate scientists have been warning about it.  The capitalist system produces commodities for sale and private profit, and the entire Bourgeois First World makes the consumption of commodities that realizes profit as a “civilized virtue”.  The First World “mall economy” is what is warming the Earth to unsustainable levels.

The current Global Climate Strike is led by First Worldist environmentalist organizations that do not seek to radically reorganize the global economy along socialist lines.(2) They do not want to get to the root of the problem of First World consumption.  Indeed, many of the organizations listed as supporters actually oppose the efforts of organized labor and the poor in the Proletarian Third World to resist capitalism-imperialism.

While the urgency to save the biosphere from almost certain ruin is righteous and should be encouraged, Leading Light Communists also need to lead.  This means we do not confuse even the deadly symptoms of an underlying disease with the disease itself.  We fight against the disease of capitalism, the entire Bourgeois First World, as the root cause of all this devastating climate change.

For our fight to be successful, we need to broaden our horizons beyond the imposed limits of imperialist-led liberal NGOs or their neocolonial partners.  We need to look towards the real proletariat in the Third World to win victory; laborers, poor farmers, and slumdwellers alike.  For the purposes of a Global General Strike (for the climate, against empire, etc.), organized labor in the Third World can and play a should play a key role.  As many as 200 million workers in India alone participated in a General Strike in early 2019.(3)  The prospect of general strikes of that scale happening all over the Proletarian Third World in increasing numbers and duration terrifies the imperialist bourgeoisie, but it should delight environmental activists in the First World who truly desire climate justice in the spirit of global equality. 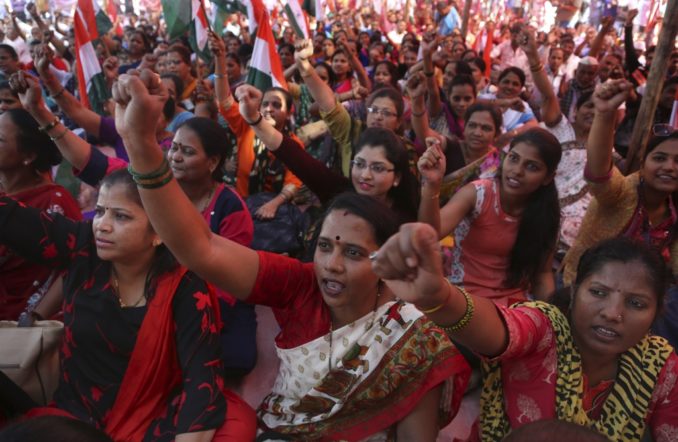 Even though general strikes in the Third World are currently led by revisionist and reformist organizations, a general strike can teach millions of workers about the New Power that they can wield through their united collective action.  We can win ecologically conscious people in the First World to communist consciousness in solidarity with a growing New Power within the Third World.  And when the time is right, we can wage a Global People’s War to sweep away the global capitalist empire and set up a New Socialist global order, where we will put people and planet over plunder and profit.

The longer answer to the original question “Could a Global General Strike succeed” is “YES…BUT ONLY IF WE FOLLOW THE LEADING LIGHT TO COMMUNISM!” Striking for the Earth means striking for communism, because communism is, was, and always will be the BEST way to organize society!

Red Salute!  Leading Light Communism will save the world!